Living in the mountains means we are surrounded by forest with it’s many trees -
mostly evergreens. As I hike and tend to my own yard I have noticed that there
are more pine cones on the trees and on the ground than I ever remember seeing
before. What I learned was that the summer of 2019 is considered a Mega Mast
Year.

A Mega Mast Year is a year in which trees and other plants produce
exceptionally high amounts of seed. ‘Mast’ are the fruits, seeds, and nuts of
trees and shrubs, which are eaten by wildlife.

According to a Google search, after trying .edu search on the subject, “The
summer of 2019 has been a Mega Mast Year, when trees across large areas of
forest synchronously flower en masse. The prolific fruits and seeds that follow
have triggered a good breeding season for many birds and other wildlife.”

The amazing thing about a Mega Mast year I just learned according to an article
by Ethan Trapper, a Chittenden County, VT forester, is “The key strategy is
coordination - it works if everyone does it at once. How tree species coordinate
mast years is still somewhat of a mystery, but this ‘synchrony’ is probably aided
by some combination of chemical signals passed through the air or through
underground root/fungal connections and weather cues.”

To read more about this fascinating event you can visit:
www.charlottenewsvt.org/2019/09/05/mast-years

Posted by Extension at 7:30 AM No comments:

My Top Tips for Mountain Gardening

After nearly 20 years of gardening in the mountains, I am moving from zone 4 to zone 6.  While there is part of me that is excited about the expanded possibilities for my new garden (cactus, tomatoes, and vines, here we come!), I am also cognizant of some of the pleasures of gardening in the mountains, such as the bountiful season-long color, the zing and flash of the many hummingbirds, and the more plentiful rains (combined with cooler temps) that make it possible to use very little water to garden.

As my parting mountain garden blog post, I want to leave you with my top tips for gardening in the mountains:

Each plant has a different temperature set point at which to germinate, grow, and set flowers or fruit.  Some plants, such as cool season plants, don’t need to accumulate as much heat to do their thing.  Warm season or late blooming plants need to accumulate a lot more heat – and mountain gardens can’t always provide enough heat.  This means that the USDA zone for a plant doesn’t tell the whole story. A plant may be hardy to zone 3, but if it needs a lot of heat in the summer, it won’t bloom satisfactorily.

Native plums are a good example – they are hard to zone 3, but they will not flower and fruit unless they get enough heat. Because I adore them, I decided to try them at my house at 8,700’ on the south side, and while they are alive and leaf out every summer, they have never bloomed due to the lack of heat. I plan on digging them up and bringing them with me to my new garden, so they can achieve their full potential. Similarly, don’t buy late-summer or fall blooming plants, because they need more heat to bloom.  I’m looking at you, Echinacea and Russian Sage!  At my house, they
were just beginning to bloom when summer was over and snow was starting to fly.

2.       Maximize microclimates (or manufacture them).


Microclimates are hugely important in the mountains.  There can be up to one zone difference between sides of the house, or sides of the mountains.  This is why I like to say “my 8,700 ft. is not the same as your 8,700 ft.”  On a south-facing exposure, you may be able to grow an entirely different suite of plants than someone with a north or north-east exposure.  Similarly, the south facing side of your house is the place to put your more tender plants, and the north side should be for bone-hardy shade tolerant plants.  Another tip is to create your own microclimate by building a bed that slopes to the south, and adding large rocks (head size or bigger) to maximize heat.


4.       It’s better to exclude critters than continuously try to fight them.


Make sure you figure out which critter is truly damaging your garden, because this will help you know how to deal with them: https://extension.colostate.edu/topic-areas/natural-resources/burrowing-animals-determining-species-by-burrows-damage-6-521/).

Pocket gophers are one of the most problematic critters out there, since they are prolific, live underground, and eat a plant’s roots.  Voles are also problematic, but they are frequently blamed for the damage caused by pocket gophers. Voles usually just eat the tops of herbaceous plants or girdle woody plants rather than eating roots. Voles can be excluded by loosely wrapping hardware cloth around the lower trunk of trees and shrubs.

Rabbits can be excluded with a 2 ft. high fence, and deer with a 7.5-8 ft. fence.
Moose are just a problem, and can get through most fences. It’s also hard to chase them away!

Another option is to plant less tasty plants: https://gilpin.extension.colostate.edu/programs/mtn-hort/critter-resist-plants/


6.       Ask yourself if warm season vegetables are really worth the time and effort.


Yes, you *can* grow tomatoes, but is the flavor and yield worth the months of tending seedlings, watering them, and protecting them from early frost, hail, and critters?  I grew tomatoes for many years,  and had the bragging rights of getting ripe tomatoes in the mountains, but decided in the end that it wasn’t worth it.  Your mileage, of course, may vary, especially in a warmer microclimate.

Warm season vegetables that may prove more rewarding include some early summer squash, bush beans, and early cucumbers.  Corn and pumpkins are even harder than tomatoes, and I don’t recommend even experimenting (although I know that will cause some of you to go right out to prove me wrong, and more power to you).

You will struggle less and produce more if you stick with cool season vegetables (see this fact sheet for examples: https://extension.colostate.edu/topic-areas/yard-garden/vegetable-gardening-in-the-mountains-7-248/)


A floating row cover is a spun-polyester fabric that lets light and water through, but provides a little frost protection, keeps insects out (and critters!), filters the high-intensity high elevation sunlight, increases humidity, and provides some hail protection.  What’s not to love?

Most of the cool season crops such as kale and lettuce don’t need to be pollinated, so my practice is to keep the row covers on all season, and just take them off to weed, check on the plants, and harvest.  I lay the fabric directly on the plants, and don’t use any supports. I have found that almost any kind of support causes the row cover to rip in the wind.

The covers will last for many seasons if they don’t rip, which is good, because they are not super cheap. Don’t buy the very light insect-only row covers – they will not stand up to the wind.  They should be a bit opaque and provide a little frost protection.  I seldom see them for sale in garden centers, so you may need to buy them online.

Posted by Extension at 7:30 AM No comments:

Have you been getting this visitor in your home of late? 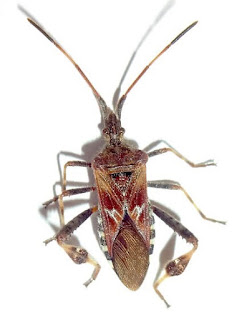 Conifer seed bugs (Leptoglossus occidentalis) seek shelter over the winter and often end up in homes. They are classified as nuisance invaders because they don’t harm humans or our homes.

During the growing season Conifer seed bugs feed on seeds, primarily of conifers. They have distinctive enlargements on their hind legs which places them in the leaf-footed bug family (Coreidae). These bugs can give off an odd odor, reminiscent of Pine-Sol cleaner.

During the winter, adults are semi-dormant and live off fat reserves. In the spring Conifer seed bugs return to the outside and feed on plants. In late spring, females will lay eggs, and once they hatch, the immature insects feed on seeds. 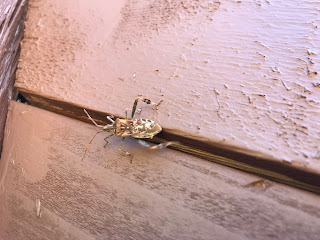 Insecticides are not recommended for use on Conifer seed bugs. The most effective treatment is to keep the house well-sealed in the fall when these insects are looking for shelter. Individual bugs can be vacuumed.

Posted by Extension at 8:00 AM No comments: