Summer’s heat brings many things, both good and bad. The snow melts, opening up the high country for hiking, the flowers bloom, the birds sing and make nests, the pine pollen flies, the mosquitoes bite, and the noxious weeds begin to show themselves.
Noxious weeds are defined by the state, and are alien (not native) plants that cause problems for agriculture and ecosystems. Because they arrive in this country without the insects and diseases that help keep them in check in their country of origin, they have a competitive advantage over our native plants, and can cause species extinction on both local and global scales.
Here are some of the top misconceptions about noxious weeds I’ve heard:
1.   “Noxious weeds are medicinal plants.” A particularly pernicious misconception around here is the confusion between Musk thistle (Carduus nutans), which is a noxious weed with no medicinal properties, with Milk thistle/Blessed thistle (Silybum marianum), a plant that has been used medicinally for centuries, but does NOT grow wild around here. Scentless chamomile has none of the properties of Roman or German chamomiles.  It is important to be careful about which plants we actually have. For one thing, the person who collects musk thistle will be disappointed by its lack of liver-protecting qualities. For another, it is imperative that we correctly identify any plants we intend to control (there are also native thistles that should be protected). Granted, there are some noxious weeds with medicinal properties (St. Johnswort, mullein, tansy, chicory, wild caraway, and burdock), but they are small percentage of the rest of the state noxious weeds with no medicinal purposes. Further, most of the ones I mentioned are on “list C” of the noxious weed list, which means that they are widespread overall, and less efforts are put towards their control.  These weeds will likely be around in perpetuity for anyone to wildcraft, and I encourage people to harvest as much of them as they like (just please pull the roots, too, and make sure the weeds have not been treated with an herbicide).

2. Noxious weeds somehow ‘heal’ the land.” I believe this myth has its origins in permaculture, and there is quite a rift in the permaculture community about noxious and invasive plants. While noxious weeds do get a foothold in disturbed and bare land, they can also quickly invade intact ecosystems, reducing biodiversity and changing ecosystem function. We have plenty of native plants that, were there no noxious weeds to get there first, would fill in the bare spots and do a far more effective job. These are called “pioneer species,” and bee plant, gumweed, tansy aster, scorpionweed, and some grasses are examples. Unlike noxious weeds, these pioneer species often act as ‘nurse plants’, harboring and protecting seedlings of longer-lived later successional plants.
3.      “We cause more harm treating weeds than leaving them alone.” Noxious weeds grow rapidly (8-12% per year or more), and reduce biodiversity. Where oxeye daisy, Canada thistle, leafy spurge, and the knapweeds grow, few of our native flowers can make it. And native plants are what support our native pollinators – if we want to protect these critical species, we need to preserve the plants that support them. We must also consider the birds, elk, rabbits, deer, etc, that all depend on native plants. Weeds can be controlled by pulling, sometimes by biocontrol, and with herbicides. I know herbicides get a bad press, but I have visited many sites where the noxious weeds were controlled with herbicides, and I have seen firsthand the return of diversity and a flourishing ecosystem. Yes, herbicides must be used judiciously and strictly according to label, but they can be a very effective tool, especially when there are too many weeds to control by hand, or the weeds have deep root systems.
Posted by Extension at 8:03 AM No comments: 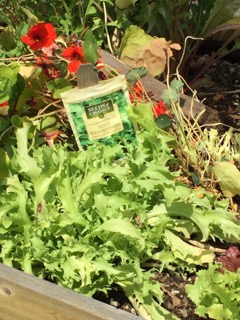 You will probably laugh, but I love growing lettuce!  Weather is obviously a big factor but continuous harvest and reseeding will keep you in nutritious greens almost year around. The key is to protect them from extreme cold and heat by using floating row covers and netting. There are many varieties that work well at altitude.

I prefer the red and green leaf lettuces to head lettuce.   Curly endive, arugula, mache and mesclun varieties are a bit different and add color and interest to salads.  I also like to throw in a couple of herbs and edible flowers to the bed.  This year I tried pennyroyal (Mentha pulegium) and I always love nasturtiums (Nasturtium officinale).  Both deter pests and nasturtium is fabulous for color (bright orange red and yellow) in the garden and delight in a salad.  Nasturtium are a member of the watercress family, have a light peppery flavor and make your salad look like it came out of a gourmet’s kitchen!  Pennyroyal, a member of the mint family, spread well, and did a good job keeping down the weeds. 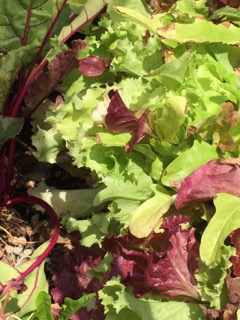 To find the varieties I preferred to buy seeds with several different types, often called a salad blend.  Watching them grow, you can determine what is most flavorful and prolific.  It’s a good plan to always find choices with the shortest maturity dates but lettuce is such an instant gratifier that it sprouts almost overnight!

This year I tried a new variety of romaine lettuce called “Freckles” which was fun.  It tolerated summer sun very well, stayed crisp and its red and green freckly color was an addition to the garden.  The watercress wasn’t as successful.  It was planted in a bed that wasn’t covered and it clearly didn’t grow as well.  I think the light was OK but it got way too much rain (did I just say that?) so grew more slowly than I think it should have.  I look forward to trying it again in a different bed.

Growing lettuce is pretty easy if I can do it; just protect it from all elements, harvest often, and enjoy your bounty.  Pick right before you plan to eat, as some varieties will be a bit limp if harvested too long before serving.  Taste is good but texture isn’t as appetizing.  Try something new you’ve never eaten before and I promise you’ll be happy.  If you don’t like it, I bet you have a friend or neighbor who will.  I recently visited the Boulder Farmer’s Market and saw bags of salad greens very similar to the varieties I listed above.  Imagine how pleased I was with myself seeing how much the farms were charging for “my crops”!!!
For information on the health benefits of home grown lettuce and pictures of many varieties, check out CSU Fact Sheet 9.373.  General info on all leafy vegetables can be found in Planttalk 1820. 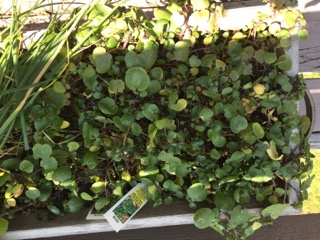 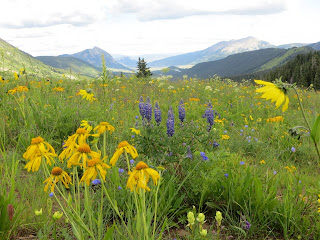 Many gardeners are also native plant enthusiasts. Please join the Colorado Native Plant Society at the annual conference - it's for anybody who is interested in native plants, from beginner to advanced!


The early bird registration of $35 for a full day of speakers, plus a field trip, is set to end on Aug 15th, and then it will go up to $45.  You can register online at: http://conps.org/volunteer/annual-meeting/. NOTE: if you are not an existing CoNPS member, there is a membership fee of $25 added to the registration.
Hope to see you there!

Posted by Extension at 1:13 PM No comments:


My wife and I have lived all over America, north to south and east to west, but now we call Colorado home and enjoy it entirely.  My wife grew up in Golden, Colorado and I grew up in the Dakota’s and Nebraska.  For the last 44 years we have visited Golden and Ouray on in a regular manner no matter where lived, but it wasn’t until we moved here 4 years ago that we appreciated Colorado.  We live in Evergreen about 7700 to 8000 feet in elevation.


It wasn’t until this year did we really study the state.  In the last 12 months we have spent time at Grand Lake, Granby, the Great Colorado Sand Dunes and Ouray.  These visits piqued my curiosity and I began to read and study the geology of the state and how it has impacted the flora and fauna.  Did you know that Colorado is 2.3 billion years old?  That Colorado at one time was at the Equator until its land mass was pushed northward by collisions with other land masses.  That the dinosaurs roomed Colorado, which was a dense tropical forest, while volcanos erupted all around it.  We know this because of the many fossils and foot prints that have been found in our area.  The Rocky Mountains may be the 2nd or 3rd set of Mountains to exist here.  Also somewhere in our history we were part of a large sea.  All I can say is “wow”- what a great state we live in.
Now what does all this mean for us now.  We are a very high, arid plains and set of mountains that has some of the most interesting wild flowers and animals on earth.  Because of all of this, we have one of the most advanced and highly regarded universities in the world.  People from all over the world visit us on a regular basis.

We have, as our state flower, Columbine which is one of the most beautiful flowers on earth and it grows almost at any altitude.  While in the wild it is usually blue and white, I found a pink and white one in the San Juan Mountains this year.
While it is not our state flower, we have another beautiful flower called an Indian Paint Brush. Some species are orange or red at levels 5000 to 8000 feet, but as we go higher in altitude, there are new species that come in pink and white, and at 11,000 feet and above it can be a light yellow or green.

Now let’s talk about what I think is the most intriguing and beautiful plants on earth: the Cactus, and we have several of them growing in our state. One of the most prevalent is the “good ole” prickly pear cactus which grows wildly around home.  While its flowers are usually a bright yellow, there are some pink ones.  Regardless of the type or structure of the cactus, it is uniquely suited to live in our arid climate.
I have not discussed many other beautiful plants and trees in our state, nor did I discuss the wide variety of animals that we share the land with and encounter regularly.  There simply is not enough time or space is this blog to do that.  But suffice to say we are very lucky to live here and share the land with our plant and animal neighbors.
Posted by Extension at 8:57 AM No comments: