I love the return of spring… there is so much going on, from the Western Chorus Frog singing in the twilight, to the return of the hummingbirds, to the moose with their newborn calves. Another pleasure is that for a brief time, our woodpecker diversity increases from the usual Downy and Hairy Woodpeckers (with the occasional Northern Flicker thrown in).  I make a point of looking carefully every time I hear the rat-tat-tat of a woodpecker in the spring, because it just might be a Red-naped or Williamson’s Sapsucker. 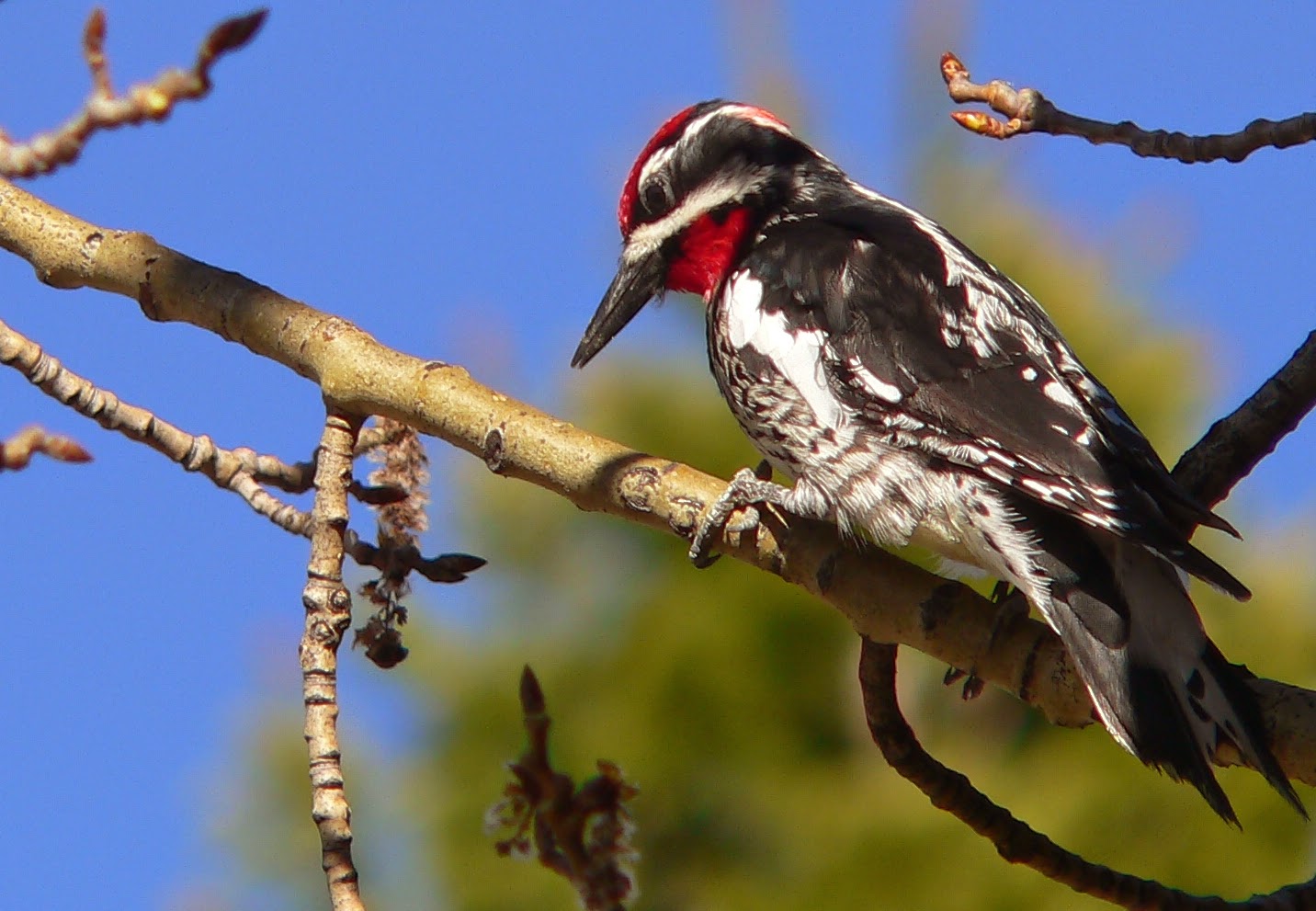 These flashy birds live in the high country, but at least at my house, they never stick around much past May.  (Don’t mind me… just coming through….. ) And I only get the Red-naped – I have yet to see a Williamson’s, although they are reported for Gilpin County (http://coloradocountybirding.org/Checklists.aspx)

Red-naped Sapsuckers, as you might suspect from the name, love to drill  trees for the sap (nutrient-and-sugar-rich phloem).  While aspen and willows are preferred, they will also use other species, although they usually will only attack pines where the bark is not too thick. The holes are ¼’ and are in neat, evenly spaced horizontal or vertical rows.  People often mistakenly blame insects for this damage.
Sometimes the holes can be enlarged so it looks like some sort of odd board game (see below).

Usually the shallow damage is not severe enough to harm the tree, although it's possible.  The most commonly recommended damage control meth­od is to wrap burlap around the affected area to discourage sapsuckers from returning. You could also try hanging bright, shiny objects such as pie tins or shiny streamers on the tree as scare devices. These techniques may or may not be effective, and they may just shift the bird’s attention to another part of the tree or to a nearby tree. If the sapsucker appears to favor a specific tree, it may be best to use it as a sacrifice tree, so the bird leaves other trees alone.

Interestingly, many other animals benefit from the work of the sapsuckers, including bats and hummingbirds!  They take advantage of the anticoagulant that sapsuckers have in their saliva that prevents coagulation of the sap, partaking of the free-flowing goodness even hours after the bird has left.

Sapsucker wells may even allow for the return of broad-tailed hummingbirds to the mountains before many flowers are blooming.  This is because the phloem sap is very similar in sugar content to flower nectar.  Sometimes insects will get stuck in the sap, providing a protein boost.
Posted by Extension at 9:36 AM No comments: 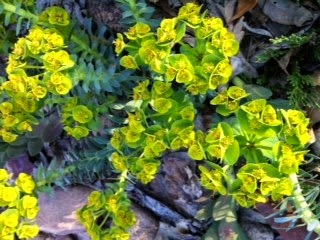 If you are like most gardeners and homeowners you don’t want uninvited obnoxious guests. Myrtle Spurge is a noxious weed which can take over your yard and open spaces. It also has a latex sap which is toxic to children, adults and pets. It was introduced as an ornamental plant and now is an interesting plant gone bad! Thanks to the efforts of Colorado residents and volunteers, it’s getting closer to being eliminated. You can help by learning how to identify it, get rid of it, or report it to have others catch it. If you like something similar in your garden you might try a native plant Kannah Creek Sulphur flower (Eriogonum umbellatum) or a sedum which attracts bees and pollinators.

Myrtle spurge (Euphorbia myrsinites) is a List A noxious weed, and the Colorado Noxious Weed Act requires its eradication. Other states may not have issues with it but have their own lists of noxious weeds. Nurseries are not to sell it in Colorado. Some cities like Lafayette fine homeowners who have it on their property.

Hand pulling and digging up Myrtle spurge are most effective. Always wear gloves, long sleeves, and eye protection when pulling and bagging myrtle spurge and don’t add it to compost. The toxic, milky sap causes severe skin irritations, including blistering. Stories are told of children going to the emergency room after contact with the sap then rubbing their eyes or face. This plant is poisonous if ingested, causing nausea, vomiting, and diarrhea. All plant parts are considered poisonous. 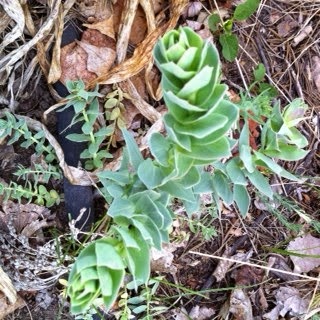 This invasive weed, is a low-growing perennial with trailing fleshy stems. It spreads rapidly and has escaped to natural areas crowding out native plants and food for wildlife. The leaves are fleshy, blue-green and alternate. The flowers appear from March to May and are bright yellow-green with petal-like bracts. Myrtle spurge is commonly found in Denver, Boulder County, Golden and the surrounding lands and has become a serious problem in the foothills and mountain ecosystems. 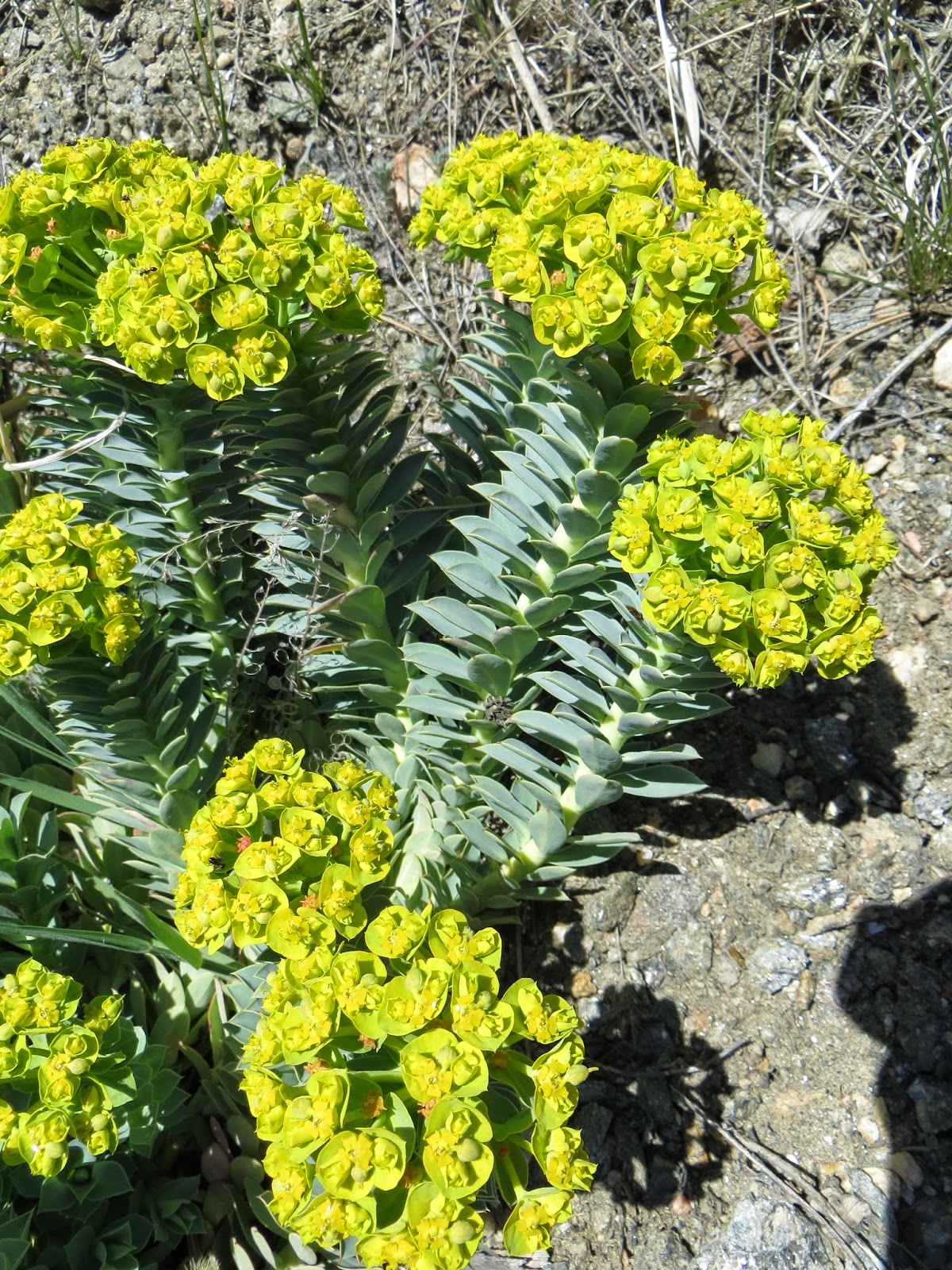 For more information on Myrtle spurge, please visit www.ext.colostate.edu/pubs/ag_natr/weeds.html or www.colorado.gov/ag and search “myrtle spurge”. Jim Krick with City of Longmont was also a source for this information. For information on Wild Lands Restoration Volunteer help with removal, email Morgan Crowley at morgan@wlrv.org.
Posted by Extension at 10:14 AM No comments:


An annual plant I love to grow in my mountain garden is the sweet pea.  I love the fragrance, and it appreciates our cool summers, flowering all season long, often attracting hummingbirds.

Probably again due to our cool summers, I find that they don’t tend to bloom very early in the summer unless they are started inside.

I usually start mine in mid-late March, growing them in a pot, which I will then put outside on my porch, twining it up the post for a nice fragrant welcome home.

This year, I forgot to nick the seed coats (which aids in germination).  I was dismayed to see only ONE pea germinate out of two pots.  Doh!

I quickly got more seed out and nicked them with a fingernail clipper before replanting.  I hope to soon see many more emerge from the soil, and hope they'll catch up, even though they're about three weeks behind.


During the summer, I never let a sweet pea go to seed, because seed set will prevent new flowering.  I pinch off all the old flowers.  However, as August arrives, I let some go to seed, so I can save some for the following year.    Wait until the “peas” are completely brown and starting to split open before harvesting.  The seeds should be dry and dark brown.