The University of Colorado Greenhouse: A Botanical Gem by Rebecca Anderson

On the beautiful fall afternoon of November 14, I had the opportunity to tour the University of Colorado Greenhouse on East Campus with Director of Plant Science Facilities Tom Lemieux. The tour started with a brief discussion of bio security and tobacco mosaic virus. This virus can affect a broad range of plant species and is usually transmitted by humans. After precautionary hand washing, the doors opened and the tour group of 20 citizens were allowed to enter the amazing collection of plants from around the world.
Every plant in the collection has a story, and Tom Lemieux knows them all. He has traveled the world collecting specimen to add to the greenhouse. The tour touched on some highlights because it would take days to meet all the individual plants. It felt like taking a world voyage or visiting a zoo, seeing plants from South America and Asia and every continent in between. Many plants from the collection have been donated to the Denver Botanic Gardens when they have outgrown the space at CU. The greenhouse itself even has a story, originally used in California then transported to Boulder and reconfigured for CU. 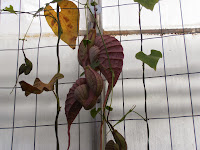 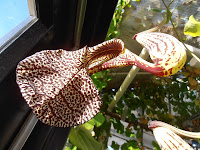 The plants in the collection are not just for admiration.  They are working plants, being used for research and education. Tom Lemieux used the tour to educate the group by introducing the concept of convergent evolution. This is when unrelated organisms develop similar characteristics to cope with similar environmental challenges. Tom Lemieux presented a selection of succulents that all looked very similar and asked which were cacti. Of the group, only 2 were true cacti and the others were related to euphorbia and other species.  He also showed us plants that have developed mutualistic relationships with insects such as ants and flies.  We examined the specialized structures (and odors) these plants have to benefit and attract these insects. There were a couple of varieties of Dutchman's pipe (Aristolochia sp.) in bloom that were gorgeous to see but not so nice to smell.


I think I could go on this tour over and over again and learn something new every time.  I recommend it for anyone who loves to learn, enjoys plants, or both. The tour was organized in partnership with the University of Colorado Museum of Natural History. It is offered in the fall and spring. The best way to find out about the tour is to join the museum's email list. The tour filled up quickly and had a long waiting list, so sign up early. It's well worth the short drive to Boulder.
Posted by Extension at 6:00 AM No comments:

Since moving from the Midwest to the beautiful mountains of Colorado just four short growing seasons ago, I have experienced many ‘firsts’ in the high altitude gardening world of Clear Creek County; snowfalls in late May, herds of elk and deer grazing/trampling their way through backyards, hurricane-force winds, gardening in snow-pants, and voles consuming a newly planted ornamental grass faster than I could eat a sandwich.
I remember my first summer here, standing in the cold wind (it was July) on an East-facing clearing, 8,700 feet up on the top of Floyd Hill, looking hopelessly at the huge expanse of rocks and dirt that was now my new yard. What on earth was I thinking?! Can you possibly grow anything up here?
Through trial, lots of errors and the Master Gardener Program offered through CSU Extension, I have learned a lot! And I am happy and privileged to share with you some of my successes and failures in the hope that you will get out there and plant something! And then, let us know how you are doing - we value your feedback.
Okay, where to start if you haven’t already? I started with a small area closest to the house. Starting small made it easier and less expensive to amend the soil, an important and critical first step. And, being close to the house made for easier access to check on and water the newly planted little garden. It also created an instant micro-climate, offering at least some protection from the wind and sun. Plus you can rap on the window to scare off the critters that will inevitably find your new plants! Preferably, it is an area you can possibly protect with a small decorative fence. Before you decide on the plants, take note of the location. Which direction is it facing? How much sun will it get? Will the location take advantage of any water run-off? Match your exposure to your plant choices. Planting the right plant in the right location will tremendously increase a successful gardening experience.
Need help deciding what to plant? Well, my 8,700 feet will not be the same as yours, as everybody has micro-climates unique to their own location, but here are just a few of my picks. I have grown them all very successfully in full, hot sun and also in part shade without protection from deer, elk or wind. They have come back bigger and stronger each year without supplemental watering. Please note, however, that they were watered on a somewhat regular basis the first season they were planted.
Hops Vine (Humulus lupulus) - defies our short growing season by quickly covering an arbor, trellis, wall or fence in just one season. Capable of growing up to a foot a day, this hardy climber comes back bigger and stronger year after year and will reward you with chartreuse cone-shaped flowers in mid to late summer.

Cat Mint (Nepeta faassenii) - is very easy to grow and does best in a sunny spot. It is one of the first perennials to come to life in my garden, and never disappoints with beautiful purple-blue flowers and gray-green foliage that remains attractive throughout the growing season.

Bearded Iris – with close to 300 species of Iris, I honestly cannot tell you which is growing in my garden as I have received each and every one of them from friends gardens ranging from Chicago to Factoryville, PA! I can tell you, however, that since planting them several seasons ago, they have thrived, multiplied and withstood our crazy winds regardless of their exposure. The iris’ come into bloom approximately the same time as the cat mint and look great together! After the flowers have faded, the unique leaves will continue to add interest to your garden.
If you have garden related questions or interest in participating in the Colorado Master Gardener Program offered through Colorado State University, please visit our website at www.clearcreek.colostate.edu , call 303-679-2424, email christine.crouse@colostate.edu, or stop by our new Clear Creek County Extension Office at 1111 Rose Street in Georgetown. You can also visit us at the Idaho Springs Farmer’s Market the last Friday of the summer months.

Happy Gardening!
Posted by Extension at 6:00 AM No comments:

Attack of the Aphids by Louise Hearn

I have a small stand of lupine. Five little plants total. The first season they started out beautiful, and then the chipmunks ran up the stalks until they bent, and proceeded to eat all the flower buds, seed heads, whatever was available at the time, smashing the remainder of the plant in the process. The second season they started out beautiful, but voles ate most of the roots before I realized what was going on and they never fully recovered. This season, I dug up what I could salvage, planted them and two replacements in wire baskets and smothered them in vole repellent. Under my watchful eye, they are now about 8 to 10 inches high, with hopeful little flower spikes peaking up from their centers. (Yes! I realize it’s September!)
Friday morning I gave them a little water and they looked great. Monday afternoon something was terribly wrong. They looked wilted and had an almost white appearance. Upon closer inspection, I discovered they were completely covered in aphids! And the base of the plants were so infested that it looked like cottonwood flying in late August! The aphids were so large, I didn’t even need my glasses to see them!! Where does this many aphids come from in two days?!?! I knew I should have taken a picture, as I have never seen anything like it! But my adrenaline kicked-in instead … Hose in hand, I violently jetted them off the struggling Lupine; but when the force of the jet hit the infested base of the plant, it scattered the aphids everywhere!

Determined to win this battle, I got down on all fours to take a closer look. Their fat little neon bodies were alive and well and practically glowing green against the dark brown of the wet mulch. To date, I’m still not sure what came over me, but I then preceded to single-handed-lay smash every single one I could find; rolling and smashing the mulch around in my gloved hands to ensure there were no survivors! I am embarrassed to admit I was actually finding pleasure in this!

Noticing a shadow, I look up to see my husband standing over me; both palms facing upwards, that incredulous look on his face. “Smashing aphids” I offered. “Maybe you should get a job,” he suggested. I guess it wouldn’t have looked so bad if earlier in the day he hadn’t caught me swatting yellow-jackets off the hummingbird feeders with the fly swatter.

In closing, I would just like to ask if anyone has the name of a good therapist in Clear Creek County … Or, maybe I will look for employment; but I can’t work in the summer! There’s too much gardening to do!!

Posted by Extension at 6:00 AM No comments: