This winter has brought heavy snow to many mountain areas. As a result, one of the things that we can expect in our turf grass areas is a fungus known as Snow Mold. (See figures 1, 2, 3, & 4) Snow mold affects all cool season grasses, such as Tall Fescue and Kentucky Bluegrass. They appear primarily in two forms, Gray Snow Mold, Typhula incarnata and Typhula ishikariensis or Pink Snow Mold, Microdochium nivale. It is possible to have both types of snow mold in one area.

Typhula ishikariensis infections may progress down to the root crown and may cause more severe and lasting damage. T. incarnata infections are normally less severe. Patches of T. incarnata also tend to recover more quickly in the spring.

Depending on the height of the mown grass, the shape of the infections may vary. On grass cut ¾” or less, the size and shape of gray snow mold is roughly round and 6” to 12” in diameter. On grass mown taller, the size and shape of the infections may not be as well defined. These patches enlarge by radial expansion of mycelium (the mass of fine branching tubes, know as hyphae, that forms the main growing structure of the fungus) under the snow. The Typhula spp. survive in the form of sclerotia (skil – ro – she – a). These are survival structures often found embedded in dead leaf tissue or in thatch. (See Figures 5 And 6) These sclerotia vary in size and color, becoming smaller and darker as they dry.
Formation of gray snow mold requires snow cover for infection and patch development. Another condition which is favorable for gray snow molds are temperatures just above freezing, 32 degrees F - 36 degrees F. The optimal conditions for snow mold activity occur when snow falls suddenly and remains on ground that has not been frozen.

The most important means of preventing or reducing snow mold problems is the care of the grass at the end of the summer season. Fall fertilizer programs should be timed so that there is no burst of succulent green growth which makes the grass prone to winter injury. Fertilizers should be timed when the leaf blade growth has stopped, yet is still green. Because snow mold activity is greatest beneath covers that maintain moist conditions, all leaves or other materials should be removed from the lawn. In the spring, rake away dead and matted areas of grass to allow the new growth to begin and to allow air movement within the turf canopy.

Fungicide applications for snow mold are not recommended for home lawns except in extreme cases. Fungicides are most effective if applied just before the first snow fall.

Pink Snow Mold, Microdochium nivale, is the other snow mold we are likely to run into in this type of season. The common name of this disease, however, is deceiving. Pink snow mold is only pink in certain environmental conditions, so do not be too quick to diagnose. The sure way to diagnose which snow mold you have is by the kind of spores they produce. In gray snow mold look for the sclerotia (Figures 5 & 6) and in pink snow mold look for mycelial threads (Figures 7 & 8). The pink snow mold produces large numbers of microscopic crescent shaped spores in sticky masses (Figure 9). This snow mold blights the leaves, but is not reported to affect roots or crowns. Pink snow mold is most prevalent on turf maintained at heights of three inches or more. This pathogen, unlike grey snow mold, may be active over a broader temperature range, from 30 degrees F to 60 degrees F. Because of this, pink snow mold does not require snow cover for infection and may be active for longer periods of time.

Posted by Extension at 9:34 AM No comments:

Where Do Bees Go In Winter?

Where Do Bees Go in the Winter?

I have been asked a few times what happens to the bees in the winter. Bees and other insects have special adaptations, so their species survives from year to year. Here is a look at bee adaptations and life cycles in the winter time.

Honey Bees
Worker bees foraged all summer and into fall bringing in food reserves to last them the winter. When temperatures start to drop, honey bees huddle together to make a cluster and shiver their wings. Shivering provides warmth for the hive. Their main goal is to keep the queen warm so the colony can survive. The core temperature in the hive can be as high as approximately 91 degrees Fahrenheit. A healthy hive with adequate food storage is more likely to survive, which reinforces the importance of best beekeeping practices by the beekeeper all year. Read how to prep a hive for winter here. 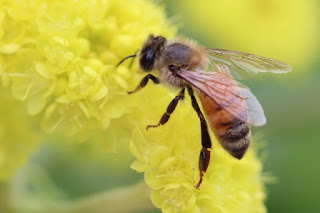 Solitary Bees
Solitary bees live a one-year life cycle. During the life cycle, a female bee builds a nest underground or in a cavity. She will collect pollen and nectar to bring back to the nest. All the collected pollen and nectar is made into a ball called “bee bread” which will be all the food needed for one growing bee. The female lays an egg on the bee bread and seals up the nest. After the egg hatches, the larva will go through full metamorphosis from a larva, to a pupa, and on to an adult before emerging from the nest the following season. The lives ended for the female and male solitary bees we saw flying around this summer, but their brood is warm for the winter underground or in a cavity, and will emerge next summer. 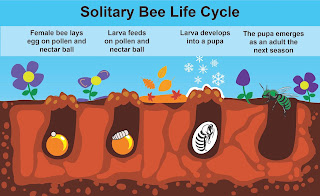 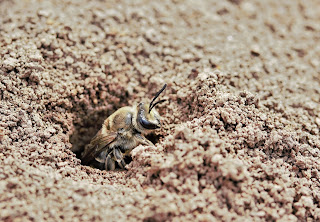 Bumble Bees
Bumble bees live underground or in large cavities and have a one-year life cycle, like a solitary bee. During the summer, new queens and male bees hatched. They left their colonies to mate. As temperatures dropped, the male bees and worker bees from the current season’s colony died. The new, mated queens found a place to rest and hibernate over the winter, usually underground. When spring arrives, she will emerge, begin to forage, build a new nest, and lay eggs. The eggs will mostly be female worker bees at the beginning of the season. The queen will continue to lay eggs throughout the season. In late summer, new queens and male bumble bees will hatch and leave the colony and the cycle repeats itself. Queen bumble bees are capable of living alone, unlike honey bee queens. 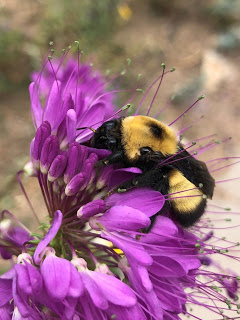 For more information on what happens to other insects in the winter, you can refer to this CO-Horts Blog post written by Jessica Wong.

Posted by Extension at 7:00 AM No comments: 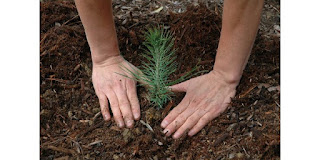 Low-cost seedling trees and shrubs from the Colorado State Forest Service are now available for order, as part of the 2020 Trees for Conservation seedling tree program. The seedlings can be purchased locally from cooperating agencies across Colorado. Early orders are encouraged while a larger species selection is available.

The focus of the tree seedling program is to help landowners to meet conservation goals, restore forests impacted by wildfire and other disturbance, reduce soil loss, and enhance wildlife habitat. The program also allows landowners to plant vegetation in areas impacted by tree insects and diseases.
Forester Mike Till hopes the program will inspire landowners to take personal pride in the care of their properties through planting trees or shrubs. Planting seedlings can help increase the resilience of the forest to natural disasters by re-establishing lost vegetation, reducing soil erosion, improving air quality, and improving regional species diversity.

When considering which species to plant, landowners should consider elevation, aspect and soil type. Visit the Colorado State Forest Service website to find your local seedling sale and to obtain local assistance on tree species selection and ordering.

Posted by Extension at 9:07 AM No comments: