When my younger son was an infant, he was a colicky little thing, but something that really helped him was catnip tea consumed by his mama. Catnip is used medicinally as a carminative, which means that it helps get rid of intestinal gas. The chemicals in catnip that do this are readily secreted in breast milk. I will always associate the smell and taste of catnip tea with the sweetness of holding my tiny son. Catnip's volatile oils are also believed to have sedative and antispasmodic properties in humans. These same chemicals make it a good companion plant in the vegetable garden, and it is recommended for planting alongside potatoes and leafy greens to ward off common pest insects. By contrast, it is a draw for beneficial insects. One beekeeper I know recommends planting catnip near bee boxes since bees love to visit the flowers, and the volatile oils seem to help control Varoa mites. Catnip is also a food source for some butterfly species. Deer and rabbits,on the other hand, don't care for it much- a nice plus virtually anywhere in North America.

Read more »
Posted by Extension at 3:10 PM No comments: 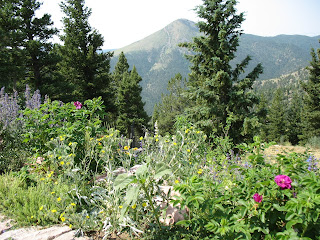 Jefferson and Gilpin County Master Gardeners have joined forces to bring great strategies to the gardeners facing the challenges of gardening in the high mountain areas. These CSU trained gardeners will be blogging at coloradomountaingardener.blogspot.com.

The issues that face those who garden at elevation are very specific and somewhat more challenging than gardening at 5280 feet, and therefore information we provide to those gardeners just does not translate for mountain gardeners. For example, low humidity, poor soil conditions, drying winds and this year, even wildfires threaten gardening success. Keys to success in gardening in the mountains include selecting appropriate plant material that has shown itself to withstand what nature can throw at it, and building your soils to help plants succeed.

Inaugural topics for the new blog will include vermicomposting outside in the mountains, winter dessication of pines, early spring bloomers and even a favorite plant.  Contributors plan to cover gardening with various wildlife, no water gardening and short season vegetable varieties for high country gardens, in addition to other topics that vex mountain gardeners.

In the meantime, for hints on gardening in the mountains, consult CSU Fact Sheet Colorado Mountain Gardening Basics,  at http://www.ext.colostate.edu/pubs/garden/07244.html.

Posted by Extension at 3:06 PM

Such an Early Spring! By Irene Shonle


Everything is so early this year!   We had the odd sixty degree day in March, and everything seems to be at least three weeks ahead of schedule.  Snow melted early, aspen leafed out sooner than I have ever seen, and even the hummingbirds broke their earliest arrival record by a full week.  What a difference from last year, when the spring was slow to come and rainy, and the record snows took forever to melt off the high country.
On Memorial Day, my husband and I took a walk in Golden Gate Canyon State Park.  To my surprise, the Fairy Slipper Orchids (Calypso bulbosa)  were out, and many had already begun to fade.   I usually don’t even start to look for them until after the first week of June.  I guess I should have realized they would be way ahead of schedule, too.
Posted by Extension at 2:09 PM No comments: