Because plants are rooted in the ground, they use one of two major strategies to get their pollen from one plant to another to produce the next generation.
One is through the means of animals– think bees, hummingbirds, butterflies, and even bats.  In exchange for nectar or pollen, the animal visits one plant and then another, physically transferring the pollen.

Some plants, however, skip the middleman, and literally throw caution to the wind.  They release their pollen, “hoping” that some will land on another plant of the same species.  Because these wind-pollinated plants depend on something that is as unpredictable as wind, they are forced to release clouds and clouds of pollen, rather than the much smaller amounts produced by insect-pollinated plants.
That is why everything is now coated with a green-yellow film.   The pollen grains get into noses and throats and eyes, and can be very irritating.  And, interestingly, I just heard from a friend’s allergist that people are rarely actually allergic to pine pollen  – the pollen grains are too big to really cause much of a reaction.  However, there are lots of other plants flowering right now that can cause an allergic reaction, and that combined with the irritant of the pine pollen is enough to make for some true suffering for the unfortunate.  Luckily, the season doesn’t last too long, and we can all hope for a nice rain to drop it out of the air.

Even though pine pollen may not be the major cause for sneezing and hayfever, other wind pollinated plants more than make up for it.  Ragweed is the major culprit, other wind-pollinated problem children are  sagebrush, redroot pigweed, lamb’s quarters, Russian thistle (tumbleweed), and English plantain. Some species of grasses and other wind-pollinated trees also produce highly allergenic pollen ( I personally am allergic to smooth brome).
Posted by Extension at 10:04 AM No comments:


Mulch comes in different types and textures. You may want to use it for the three main reasons: soil moisture retention, weed suppression and aesthetics. It can also help keep the soil temperature steady. Choosing the right type for your location will help keep it in place with the look you like. In high wind areas bark chips and cocoa shells usually blow away – there goes your work- so shredded bark or pebbles is a better bet. In fire danger areas it’s being recommended by fire folks to not use wood mulch near your home. Rock mulch, usually pea gravel, can be used and actually some xeric plants like this better plus it can help reduce soil erosion on slopes. 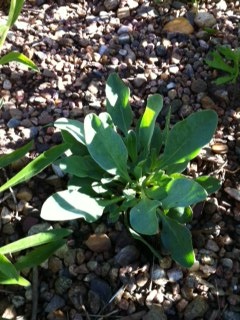 Wood mulch is good for plants that need moderate water and for winter protection. Clean shredded cedar or pine looks so tidy when newly spread around your perennials and bushes. About 3 – 4 inches deep is needed. Be careful not to mulch up to the base of plants but leave some breathing space instead. A friend and I compared mulch and no mulch when we happened to plant the same pre-planned perennial garden last summer. My plants grew larger and faster and filled in but she was not out there weeding and may have used less water. Now that mine are mature size I may mulch this summer to save on weeding. I did plant ground covers to serve as a living mulch for weed suppression and this helped quite a bit. Another option is no mulch, which almost all of a vegetable or edible plants garden will be. Using clean straw or dried untreated grass cuttings under strawberries or veggies which grow on the ground like squashes can help the fruit grow on a dirt free surface. Easier to pick and eat. Gardeners turn in the straw or clippings when they put the bed to rest in fall. Black sheet weed mat can give you soil warming, moisture retention and weed suppression benefits before you plant tomatoes or other plants. Weeds and grass can continue to sprout and grow under it so be sure to remove their roots from the soil when you clear out and prepare your planting area. Plastic sheeting is not recommended since water can’t get through. Wood mulches can take nitrogen from the soil as it breaks down so adding a light amount of nitrogen to the top layer of soil prior to spreading the mulch is often done. As the organic mulch breaks down it adds to the soil structure and the living organism microclimate. Whatever mulch you use will need annual refreshing. It’ll give you something to do in spring or fall. 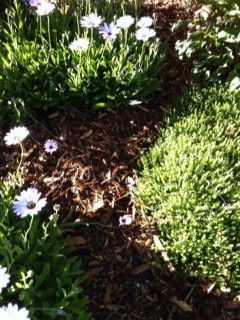