In the spring, we chitted Masquerade potatoes in a variety of ways and then planted them.   For those of you who don't want to read the original post, we chitted or pre-sprouted the potatoes to break dormancy and increase yield in our short season.  Because there was a lot of contradicting information out there, we decided to try out a couple of different methods.  We chitted the potatoes in our dark, moist worm bin,  in the dark, and in bright, indirect light.  Admittedly, this was an extremely small sample size (n=2 for each treatment at 3 different locations), so it can hardly be considered to be sound scientific research, but it was fun to see what would work best.   As a bonus, the Masquerade potatoes were gorgeous (and tasty, too!) 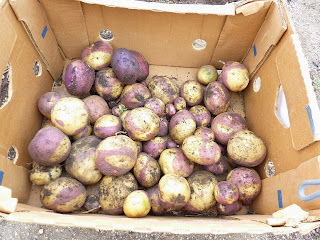 At the Community Garden, we got 17 total pounds from 6 plants.  2 of the plants grew together, so we couldn't really separate out the potatoes from each, but here's what our piles looked like:
The "dark" treated potatoes did seem to produce the most, overall (although we can't be sure how many potatoes to attribute to the dark vs the worm on the left hand side).

Last of the greens - by Irene Shonle

I don't know about where you live, but we've gotten down to 15 at my house several times already.  I got most of my greens and vegetables in before the real cold hit, but I didn't get to everything, because I went out of town, and I knew anything I picked would spoil in the refrigerator.
On the frosty morning after I got back, I went out to the garden with a little trepidation to see what remained. I was hoping something survived.
Happily, the combination of floating row covers and hardy greens meant not all was lost.  Floating row covers will protect plants down to 28 degrees, or 24 degrees, if you have a heavier one.

The kale mostly survived just fine (except in places where the snow pulled the cover tight against the plant; there was some frost damage there).  Only the smallest leaves of Swiss Chard, protected by the frost-killed larger leaves, survived.  The parsley was perfectly happy -- not even a bit of damage, even where a corner of the row cover blew off!  The baby arugula was fairly sad -- I think it would have done better if I had put hoops under the row cover to keep the snow off.   I'm dreaming of a cold frame for future late and early season lettuce crops.

Posted by Extension at 2:53 PM No comments:

Extending the Season by Rebecca Anderson

Cooler mornings have me thinking about fall, which will be here before we know it. With cabbages almost ready and tomato vines still covered with fruit in my garden, I'm planning for season extenders to give everything a few more weeks (hopefully!) to get the most out of my growing season.

Lots of different materials can be used as covers to extend the season.  The coverings must either be removed during the day or be clear enough to allow sunlight to pass through to warm the soil.  Sheets and blankets can work as long as they stay dry. If the fabric absorbs water, it will actually make the surrounding area colder as the water evaporates.  The sheets and blankets need to be removed during the day to allow sunlight to reach the plants and soil.  Floating row cover material is available from some nursery suppliers. It provides similar frost protection as a sheet but allows sunlight to pass through so it doesn't have to be removed every day.
Read more »
Posted by Extension at 1:46 PM No comments:

Those Vile Voles! by Louise Heern


Just when I think I can no longer tolerate the impossible growing conditions of high altitude gardening, I’ll catch an amazing view of the sun rising over clouds low enough to touch; a beautiful hawk soaring across a cerulean blue sky; or a cool breeze when the rest of Colorado is melting under hundred degree temperatures. There are so many beautiful advantages of high altitude living! So, I have decided to (finally) stop complaining! And, instead of fighting the gardening conditions here, I will work along with them.

Read more »
Posted by Extension at 2:55 PM No comments: 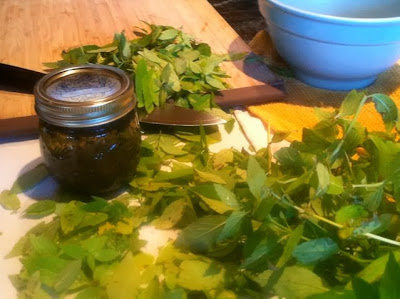 Every end of summer season my husband and I make ranch mint sauce.  We use the recipe his grandmother and mother used and we live on a ranch, thus the name.  We find the wild spearmint, Mentha Arvensis in wet areas by a pond or creek or wetland area.  The spearmint is in the Lamiaceae family.  It is a herbaceous perennial plant that has square stalks, opposite leaves and is aromatic. Small pale purplish flowers are clustered on the stem and are prickly.  It is abundant and reseeds very well.  We enjoy putting the sauce on lamb, peas, carrots and new potatoes.  We make enough for ourselves, family and friends for Christmas gifts.


Here is the recipe for Ranch Mint Sauce


Make a syrup of sugar and liquids.  Simmer for a least 5 minutes.  Add chopped mint leaves.  Pour in to sterilized jars and process in boiling water bath for 10 minutes.  Or just make a single recipe and store it in the refrigerator.  It will last for months.

Posted by Extension at 8:48 AM No comments: